We cannot remember a time when we’ve seen such a widespread disparity between the economy and the stock market.

The unemployment rate soared to a high of 14.7% in April, then fell to 13.3% in May, while the survey of businesses by the U.S. Bureau of Labor Statistics revealed a loss of 20.5 million jobs in April.

In a single month, nearly all the jobs created after the financial crisis in 2008 disappeared, at least temporarily.

Significant layoffs continue, with the number of first-time claims for unemployment insurance topping 40 million over a 10-week period ending May 23 (Dept. of Labor/St. Louis Federal Reserve). 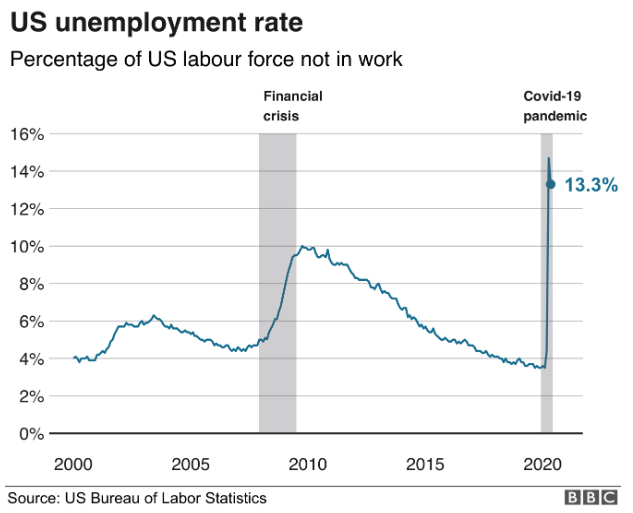 Nearly one in four working Americans have experienced a job loss.

This suggests Paycheck Protection Loans are kicking in, and reopenings are encouraging businesses to recall furloughed workers.

Let’s back up for a moment.

In April, we noted this: “In just a three-week period, the number of first-time claims for jobless benefits totaled an astounding 17 million. For perspective, during the 18-month-long 2007-2009 recession…first-time claims totaled 9.6 million.” Yet, “The Dow Jones Industrial Average added 2,107 points over the three Thursdays the massive number of new claims were released (St. Louis Fed).”

Simply put, economic activity is falling with depression-like speed, but the stock market is in the midst of an impressive rally (until last Wednesday).

During the financial crisis, the Dow lost nearly 57% from its October 2007 peak to the bottom in March 2009 (St. Louis Federal Reserve). This year, in about one month, the Dow shed 34% before hitting a near-term bottom on March 23.

The adage “stocks climb a wall of worry” has never been more appropriate amid economic devastation and an outlook that remains incredibly murky.

A Closer Look at the Wall Street/Main Street Disconnect

A combination of factors has fueled the rally since late March.

The response by the Federal Reserve has far outpaced its 2008 response, which has lent a tremendous amount of support to stocks. The same can be said of government fiscal stimulus.

Investors are also keeping close tabs on state reopenings, which will reemploy furloughed workers, help stabilize the economy, and set the stage for a possible economic rebound later in the summer. Talk of vaccines has also helped.

Investors don’t simply look at today’s data, which in many cases is backward-looking. Instead, they are forward-looking as they attempt to price in economic activity, the level of interest rates, corporate profits, and more over the next 12 months.

We are beginning to see signs of stability.

Daily gasoline usage has rebounded (Energy Information Administration), daily travel through TSA checkpoints is up (TSA), hotel occupancy is off the bottom, and the same can be said of weekly box office receipts (Box Office Mojo).

In addition, the weekly U.S. MBA’s Purchase Index (home loan applications) registered its fifth-best reading over the last year (as of May 22, U.S. Mortgage Bankers’ Association/Investing.com), suggesting that low interest rates and some confidence that the U.S. economy is set to recover are lending support to housing.

Of course, these are highly unconventional measures of economic activity and are industry-specific. Outside the Purchase Index, each remains well below previous highs, but the turnaround suggests we may be seeing some light at the end of a very dark tunnel.

Any given level of a major stock market index represents the collective wisdom of tens of millions of stock market investors. It is not simply an opinion, but an opinion with money behind it.

When stocks were in a free fall in March, investors were anticipating a devastating blow to the economy. Tragically, the data did not disappoint.

Has the rally been too much, too quickly?

Even in the best of times, economic forecasting can be difficult. Today, the outlook is clouded with a much greater degree of uncertainty.

These are difficult questions to answer.

Don’t expect a return to a pre-COVID jobless rate anytime soon. But investors are betting that an economic bottom is in sight.

I understand the uncertainty facing all of us. We are grappling with an economic and a health care crisis, not to mention recent civil unrest. It’s a combination none of us have ever faced.

We have addressed various issues with you, but I have an open-door policy. If you have questions or concerns, let’s have a conversation. That’s what I’m here for.

Please recognize you are not in this alone. We are here to assist you as you formulate a plan.

The steps above offer a broad overview. Taking action is critical. It’s half the battle. Be proactive, not reactive. You may find you are in a much better position than you realized, which will relieve an enormous amount of stress.

We hope you found this review to be helpful and educational.  Feel free to pass this onto someone who might benefit from it. If you have any questions or would like to discuss any matters, please contact us anytime.

As always, we are honored and humbled you have given us the opportunity to serve as your financial advisor. If you have any questions, please don't hesitate to reach out.