WITH UNEMPLOYMENT NEAR A 50-YEAR LOW, ECONOMIC GROWTH REMAINS FIRM BUT SLOWER.

Trade headlines have driven the DOW (30 of the largest companies in America) much of the year.  September and October were no exception, as trade conversations have taken a back burner.  A shift in the federal bank’s stance to reduce interest rates sparked a rally, taking the DOW to near new highs in October. Despite a late July rate cut, an escalation in trade tensions and inversion of the yield curve (when short term interest rates are higher than longer term interest rates) in August created a brief bout of volatility. Economic growth and federal bank interest rate cuts cushioned the downside. Renewal of trade negotiations and a de-escalation of trade tensions were well received by investors.  As October sunsets, the DOW is close to a new high.

While we expect trade headlines to continue influencing market volatility, uncertainties surrounding Brexit could also influence our markets. Europe may be on the cusp of a recession, which could provide a Halloween scare to our markets.  In the near term, the House of Representatives ongoing impeachment investigations will probably be viewed positively by the markets. Some of us are old enough to remember president Nixon’s troubles coinciding with a weak market.  Was there a link between Nixon and the 1973-74 market decline, which lopped nearly 50% off the DOW?  Or did the economic fundamentals hobble the markets? 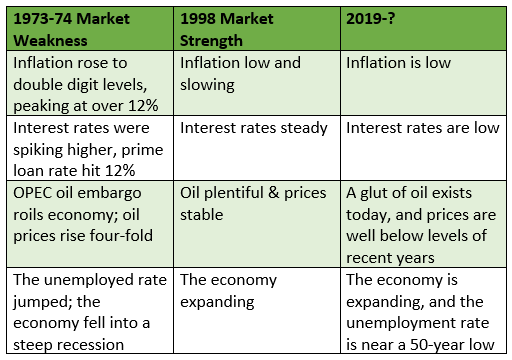 Political uncertainty exacerbated the 1973 market decline, but high inflation, high interest rates and a deep recession took a big toll on stocks as well. The late 1998 impeachment of Bill Clinton was a different story.  Stocks performed well amid much better economic fundamentals. While no two situations are exactly alike, economic conditions today are more reminiscent of the environment with President Clinton, than with President Nixon.

We can point to uncertainty lurking in the near term, but risks never completely abate.  If they do, stock markets usually rise. While we have seen a few rocky days this year, our markets have performed well.  For long-term investors, it hasn’t been a volatile year because interest rates provide little competition for stocks.  The consumer has been strong and the economy continues expanding at a modest pace. 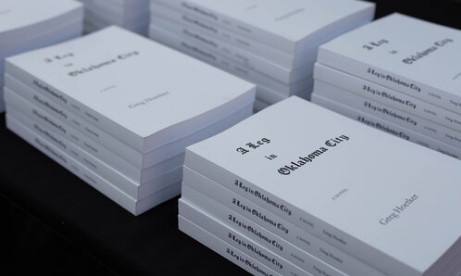 Johnny was assigned to read this book for a high school class, so I jumped at the chance to read along with him.  It’s a love story set in the timeline of the awful bombing of 1995.  A novel of lost innocence followed by a prolonged state of being lost.  A reminder of the vulnerability of the freedom provided by democracy.  Although the wound hasn’t healed, its shows how we are stronger by surviving it.  This book was recently released by another teacher at Timberline High School.  Greg spent 25 years writing and rewriting this novel.

In response to your requests, we will be hosting a client book club in January.  We will discuss “A Leg in Oklahoma City” and would love to have you join us.  The book is difficult to get, so let us know and we will be happy to mail you a copy.

Kelly went all out this year and decided to dress up as John Wayne for Halloween. Shilo, through no choice of her own, was forced to be his noble steed.

Lily and Cathy refused to participate.