What the Election Means for Investors

With the election now less than 40 days away, investors are turning their attention to the November 3 ballot. Amid COVID-19 infections, a battered economy, and civil unrest, the election results are uncertain.

Given the increase in mail in voting, we may not have final election results for several days, much like the Bush vs. Gore election. Remember “hanging chads”? The issue with punched holes in ballots was ultimately decided by the Supreme Court.

In our view the race could continue to tighten as the Republican and Democratic campaigns shift into overdrive. 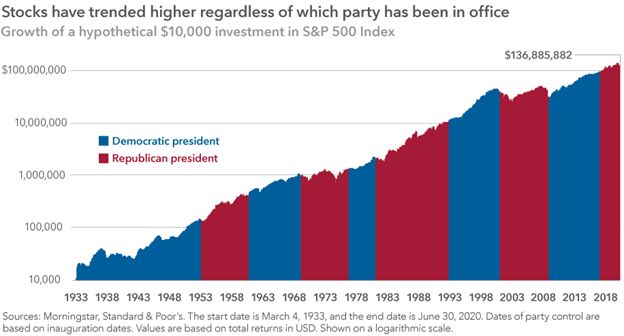 Here’s a brief look at three scenarios that could play out in November and potential implications for investors.

1- Democratic sweep – Democrats win the White House, the Senate and maintain control of the House

Otherwise known as a “blue wave.” This scenario would produce the greatest degree of political change, starting with the potential reversal of President Trump’s policy agenda on taxes, China, immigration and regulation.

One result could be a rollback of the Tax Cuts and Jobs Act of 2017, which included significant tax reductions. Overall corporate tax rates declined from 35% to 21%, providing a boost to corporate earnings. A reversal would have the opposite effect, prompting investors to consider tax changes when estimating corporate earnings. 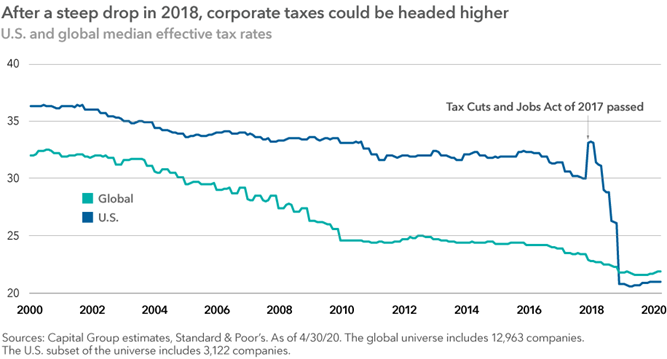 This outcome would likely result in a gridlock scenario where it could be difficult to pass major legislation. Senate Republicans could block major Democratic initiatives, much as they did during the second term of the Obama presidency.

We could see Biden governing through executive orders. There would be a great deal of pent-up frustration on both sides of the aisle. The markets historically look forward to gridlock and the limited policy changes they produce.

This scenario involves the least amount of change since it represents where we are today. The House is likely to remain in Democratic hands, so the current environment of political confrontation would continue — along with the rancorous attempts to approve COVID-19 relief legislation.

Election season can be a tough time for investors to maintain a long-term perspective, given the strong emotions evoked by politics. Campaign rhetoric tends to amplify divisive issues. This election is unprecedented in modern times because of the combination of a pandemic, a global economic recession, civil unrest and extreme market volatility.

Moving to the sidelines would be an understandable approach for anxious investors who prefer to wait and see what happens.

As history has shown, however, that is often a mistake. What matters most is not election results, but staying invested.

Consider the historical performance of the Standard & Poor’s 500 Composite Index over the past eight decades. In 18 of 19 presidential elections, a hypothetical $10,000 investment made at the beginning of each election year would have gained value 10 years later. That’s regardless of which party’s candidate won. In 15 of those 10-year periods, a $10,000 investment would have more than doubled.

While past results do not guarantee future returns, election-year jitters should not deter investors from maintaining a long-term perspective. 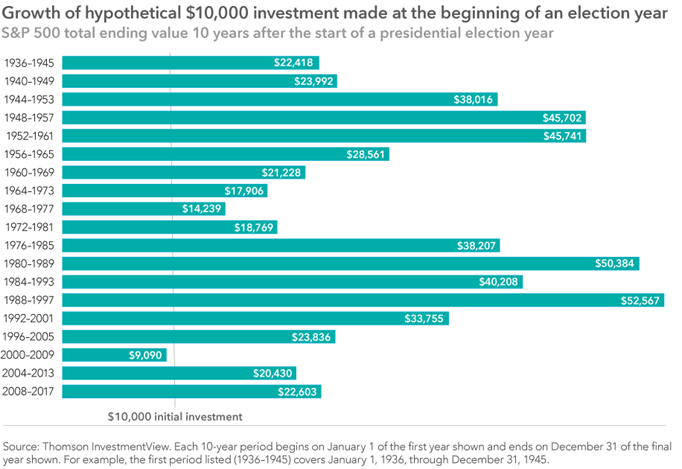 By design, elections have winners and losers, but the real winners have been investors who stayed invested and avoided the temptation to time the market.

As always, feel free to contact us anytime with questions you may have.